When you die on the 3rd try

I’m totally out of, or. . I’m sure I’m not here anymore, I can not go back. I’m flying somewhere and I do not know what I am. Everything around is dark and nasty … so I’m really dead. No paradise and beautiful virgins …

For the first time, I had a similar feeling in rafting on the Zambezi River in Zimbabwe in October 2013, where I set out to add the expedition team to an unconventional 5-day congress. The Zambezi River is one of the most challenging rivers with a lot of splendid rapids that make their names known as the Truck Crusher, the Devil’s Dagger, etc. Last on the classic 2-day cruise, there is a fairy with the eloquence of forgetting .. We should go further where the water is already spilling a little into hippopotamus and crocodile pools. Bonus. You really do not want to get out of the raft.

A few surprises at the beginning were that when we crossed the Zambia airport over the Zambezi bridge, which is also the border crossing point to Zimbabwe, local tourists offered the dollar exchange rates for their billions of dollars. Hyperinflation in practice. I was not surprised at the fact that some were jumping down the river straight from the bridge as New York brokers on a black Friday before I realized that it was Bungee jumping right at Victoria Falls. Well, thanks, I will vomit down the river, the sound of which resembled a few train sets in the tunnel. Down below, even though the stairs in the rock with an elevation of about 100 meters were endless. I caught the cramps of fatigue, heat, and partly the liquors we drank in the evening. The local boys had already rafted and raided our vests, which were twice as powerful as I used to. For a moment I joked that I had been driving for some time, but when he gave me a serious expression – he denied me with his leg and with both hands tightened my straps and made my breath, I realized he knew why he was doing it. The last surprise came on rafting, there were no footrests here! How do we balance it on the water ?! Guide dryly replied that it was for our safety to not wander in the wilderness until it overcame … We have each one of the thalismans of the river spirit Ňami Ńami, so I begin to pray to him. In addition to my breathing, I get a feeling of pus. Well, let’s see.

The first peeps are cool, keeping the balance is not that difficult, mainly still occupying the dead. We go to the next, I see how we fall into a proper hole, I try to paddle what goes on, we go against a huge wave, one more shot and … I swing with a paddle and fall into the void. In peace, calm down, say, you’ll last for 3 minutes without breath, you know. I’m spinning in a ball, paddle in both hands, and spin at a speed of madness on all sides, no light in sight. The pressure in my ears tells me that I am constantly falling, in terrible lightning click into my head number 80, which is the average depth of the river. It is not possible for me to go with such a vest at all, let alone go down. I feel like I can not stand it anymore, I have tremendous pressure in my lungs and my head. Come on, Papa. Hups, I see bright bubbles and I feel like I’m over the surface, I turn around and I get a breath, I can see the raft in front of me and the boys see me, I raise my hand and the current leads me straight to the raft, beautiful. Still a bit and hups … the stream is pulling me under the water, my fingers touching the bottom of the raft like in some B movies and sneaking, back into the hole. Fuck it noooo !!!. Fortunately, it’s just a while and I’m in the boat. It’s like kicking me by horse in my head, belly and balls.

I thank all of them and the spirit Nami Nami within, but I feel it is not for free … I like water, I swim in racing, I diving, I ride on kayak, but today I gave a lesson. Another came a week after returning home. Mom and Dad have finished their hunting season, they’ve come home and made a good deal. The warm bath in the bath, which Mom could not afford and much enjoyed at the cottage, was her last joy in this world. The spirit of wild water came to my house.

The second trip to the infinity gate was of course also in the water, somewhere in Papui in the autumn of 2015. My father was already with my mom, at that time (not until 3 months). We dived in the Raja Ampat National Park and finally I saw huge mantas and how much !! But we also saw at night how the forest stands were burning in the park so that oil palms could be grown there. Stunning ..

A decompression dive was planned around 40 meters around a cliff on the open sea, a decompression stop expected within 10 minutes at 3 meters. We went in two groups, our first. We checked the currents and settled in silence at the agreed depth and looked at the beauty. Suddenly we felt that the current was somewhat larger and came from another side. The intensity grew, we grabbed the cliff, some helped the hook on my hands, I was on my bare hand and it was hurt. The Divemaster signaled the end of the dive and fast downstream, still showing and blowing up and watching the output speed.

I show my partner that we end and he responds that he understands, so another two is already starting up. I desert and the current takes me at great speed from the cliff. Suddenly, I spin the drum like in  washing machine and I feel it pulls me down. I blow up the bag on the max and I’m going to fly the fin. Around me bubbles and vortex as a tornado, in the water. I keep my comp the face and I see bottle pressure and depth gauge and I can not believe that I am 35 meters away. Always kick for at least 2 minutes and I am still in place, even through bubbles I can see that I am a few yards from that fucking cliff. The current did not bring me to the open sea, but it drove me to the leeward side of the cliff. I’m breathing as the locomotive, the cough and my head crack. I see that the pressure in the bottle drops to red, the decompression time is growing. What the fuck it will not go away, I’m in hell …

Suddenly, I feel like I’m going up, calm down my breath and approach the decompression depth. I’m right at the cliff, on its edge, where the water is calm, but it’s clamped on both sides. I cling to the stone and breathe as slow as possible. I know it will not work out the whole decompression, but I reluctantly rely on the fact that the computer has some reserve. And if not, they’ll find me quickly and I’ll have to go back to the water with a new bottle. Around three minutes I breathe three breaths per minute, and I’m calm, reconciled. And I notice a tortoise swinging over my head a little, looking at me, the maghor flying over half the world to drown here. Suddenly it will happen to me. Like she told me to calm down and let my life just rock. Splendor.

The last tint is empty, the diving bottle is torn to the dead, and I fill my waistcoat and swim just below the water to the point where the two streams meet. I surfaced and feel that the stream is fast moving away from the cliff. But especially nothing and no one I see, because the waves are three meters high. I blow the orange buoy / sleeve I took under the water for the first time in my life, I was really enlightened­. I do not feel any symptoms of decompression sickness, perhaps it will be good. After about an hour they found me, both groups were all right. just a colleague from the other group has a torn hand from the rock as he tried to hold. but it does not bother him to knock on the yacht and thank God quietly for being back.

No paradise and no virgins, just mad images and horrible feelings. Suddenly I hear something, a voice in the distance that says something ,,,,, breathe, breathe deeply and get it. Somehow I can do it, I really breathe and climb on beautiful colorful waves. The wizards are gone, and I’m somewhere where it’s gorgeous. I come to myself, after a few hours, after eternity. What’s it called, what did I get­? Medicine? Grandmother? Where is it from? From Ecuador? So I have to go, I love it !!

I do not know if I have died, something in me certainly does, but in any case I have reborn. It still scares me a little bit, but every day it’s better. I still enjoy it here. 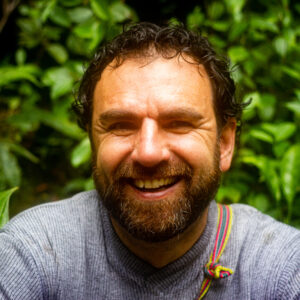