I managed to get to the bus station near the Guayaquil airport easily enough, despite being worn-out from the long flight. The bus-terminal is a mess of people milling about, with some small shops selling phones and SIM cards, a small food court, and a whole floor of booths dedicated to the many charter busses navigating the country. There is a feeling in the air of how busy it can get, but the early morning hour keeps it from being overwhelming. With some mild wandering, I secure a prepaid SIM card and a ticket to the south, to Vilcabamba, where I will be staying with Roman – one of the founders of Bosque Medicinal.

The bus itself is comfortable, although they have a TV blasting uninteresting TV shows and old movies the entire time. Luckily, I brought some headphones to try and drown out the noise. I settle into my seat and prepare to rest. As we pull out of the terminal, my curiosity overrides my sleepiness and I spend the 8-hour trip mostly staring out the window, trying to absorb as much of the country as possible from an air-conditioned seat cruising down bumpy roads. Just outside Guayaquil, it is as I expected. A mix of small houses, interspersed by large fields growing a variety of fruit, mostly bananas.

This reminds me of my childhood in the Caribbean. A few more settlements, and a bit less agriculture, but somehow the feeling is similar. Perhaps it is the casual way of living surrounded by verdant and lush vegetation, but likely it has more to do with an economically depressed atmosphere. The houses are simple, often made of unpainted concrete and rebar – reinforced steel bars used in construction. As we cruise through small towns and simple 3-building clusters on the roadside featuring a small restaurant, I am surprised by the many unfinished second or top floors. It seems most buildings feature rebar waving straight out of the concrete pillars that keep the structure together, waiting for the next floor or a roof to eventually come into being.

Despite the unfinished look of the construction, the houses, including the upper “unfinished” landings, have a well lived-in look. Laundry is drying on lines strung between the rebar, and outdoor carpets or simple plastic chairs adorn some of the open air second stories. Children peak out from open windows free of glass or a means of closing it to the elements and insects.

In short, I was struck by how truly impoverished the region is, at least in monetary and material terms. This was in stark and vivid contrast to the beautiful abundance and lush life resplendent throughout. Life was everywhere, growing, struggling, thriving, bursting from every crack in the concrete or free piece of land. Ecuador is rich, full, and beautiful. Just not by the metrics we tend to use in our current industrial societies obsessed with incomplete and inaccurate metrics like GDP and economic output.

This was a country I was already falling in love with, and I hadn’t even stepped off the bus yet. 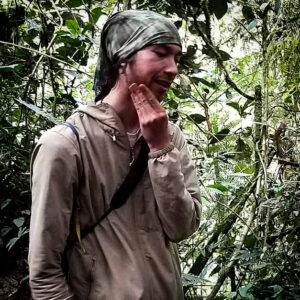